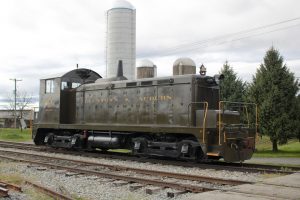 Built in 1937 by the Electro-Motive Corporation (EMC) for the Philadelphia, Belthlhem, and New England Railroad, #206 is an SW type locomotive. PBNE 206 spent time working at Bethlehem Steel in Bethlehem, PA  before being sold to the Steelton and Highspire Railroad in Steelton, PA in January of 1947.

While again being used at a steel mill it was renumbered SH 23. In the late 1950’s its original 600hp Winston diesel engine was upgraded with an 800hp EMD 567CR prime mover. With the upgrade, the original hood was modified to fit the larger engine and its original electrical system stayed the same.

In December of 1967 #23 was sold to the Maryland and Pennsylvania Railroad and renumbered again to MPA 83. While the Ma & Pa kept #83 in service, it was mostly kept in their roundhouse due to its age. On June 27, 1986 the Ma & Pa leased #83 to the Stewartstown Railroad.

The Stewartstown Railroad purchased the locomotive months later in August of 1986. Renumbering  it STRT 11 to fit their roster, #11 was used for freight and passenger trains on the Northern-Central Railway trackage in New Freedom, PA and very rarely ever made it to Stewartstown, PA due to deteriorating track conditions.

In 1997,  #11 was moved to Jim Thorpe, PA and used for Rail Tours Inc. Keeping it’s number, #11 was used as a yard switcher and for tourist trains. When Rail Tours Inc. ceased running train in 2005 #11, along with most of the rest of the equipment, was sold to the Reading & Northern Railroad.

One year later the Allentown and Auburn Railroad purchased the locomotive. It would spend a couple of years stored in Pittston, PA before arriving at the railroad’s interchange in Topton, PA in 2014.

#11 was renumbered ALLN 206, returning it to its as build number. Still wearing its Rail Tours Inc. paint for some time, #206 received a coat of black primer just in time for the first passenger trips out of Kutztown, Pa for Easter of 2015.

Soon after #206 was painted Pullman green to resemble similar engines used by the Reading Railroad. 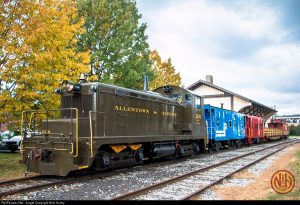 Today, #206 is frequently used running passenger trains from Kutztown, PA to Topton, PA and back, as well as the occasional freight train out of Topton.